Oh well, it's no good crying over spilt milk nor unwritten blog posts. New year, new start, resolutions and all that I've signed up to Project52 - that is a pledge to post new content every week for a year. Goodness knows if I'll stick it, but hopefully I can manage to pass 9th February 2010 :)

This isn't going to be gripping stuff, that's not what I'm aiming for. I'd like a simple log of my thoughts and what's interested me week by week. I might surprise myself and write something deep and coherent once in a blue moon but dont bank on it :)

Starting at the start - week 1

Happy new year, and all that jazz… Having been with family over the holiday we ventured home-home*, which turned out to be only a whisker away from complete stupidity. Snow. With the A68 blocked at Carter Bar, and all reports to steer clear of the A1 near Berwick, we headed for Coldstream and up through the Scottish Borders that way. Three ruts to keep the wheels in for a two-way road - which is ok (as it can be) until you meet something coming the other way, because hitting the 6-10 inches of white stuff just off line almost renders a car uncontrollable. Well be got through, but it was fairly hairy in places - most places! 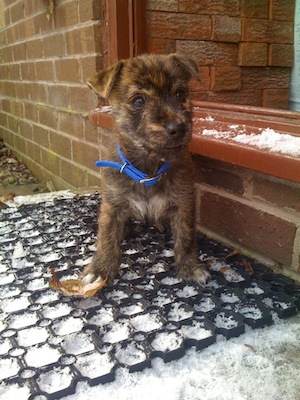 Teabag - yep that's his real name - is our puppy. He's a muppet, wee monster, and in some lights has the meerkat-look about him. He also hasn't really mastered the art of sleeping at night, or come to think of it >not<.

Mostly tapping my fingers awaiting the 2010 car launches to begin. Couple of gems though, Donington Park looks like it'll be saved after what Simon Gillet did to it, and the-team-formerly-known-as-and-still-are-until-they-can-think-of-something-new BMW Sauber have confirmed they'll unveil their car 31st January. On the other end of the good-stuff scale Flavio Briatore won his appeal against his lifetime ban by the FIA - albeit on a technicality, it's bad for F1's already bad image. Jean Todt has some work to do.

Work has slowed on my personal projects, but I'm narrowing on some GeoIP muggins for PigeonSportLive, and finalising some updates to the drivers on F1-Fans. Oh and kicking off #Project52 :)