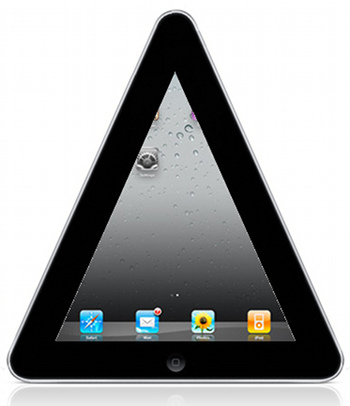 I can see them doing something similar with the pending iPad / iPad2 update.

Why? Well for a couple of reasons…

The original iPad still isn't available in lots of countries, and those that it is—other than the US— it hasn't been on sale for very long.

Couple that with the iOs 4.2 update (22nd November 2010) that effectively redefined it, it just isn't that long in the tooth yet.

That said I think they will be announcing the next iPad soon as per the rumours. They need to (be seen to?) keep ahead of the competition and on top of the market that they've effectively created. [When and where it'll be on sale is a can of worms I'm not going to delve into.]

But I think the question is, will the new iPad come in at the £439 and the first generation reduced (it won't be discontinued), or will the iPad 2 come in at £539, £639… with the original unchanged?

I have a nasty feeling it's going to be the latter.

(Yeah, the iPangle is just there for chuckles)