Running. I did a bit at school, was ok at the cross country, and enjoyed it a bit - I mean who really enjoys school cross country? Next time I put on a pair of running shoes was when I had the idea of doing a duathlon just over a year ago. It was ok, but I kept picking up a niggle of some description. This winter I entered the same duathlon series, but also a half marathon to get me going in preporation. Training for that half - it turns out I quite like running once the distance gets out a bit. One thing led to another, I got a bit carried away and entered the Paris Marathon. Cripes!

5:30am the first alarm went off, time for breakfast - to give it enough time to digest - then back to bed for half an hour or so. Soon enough we hit the metro and were on the Champs-Elysées before we knew it. Gemma and I parted ways as I headed for the 3:15 target yellow pen, and her a good vantage point. A couple of cheeky start line rice cakes, dump of the extra layer and I was ready. I think I was ready. 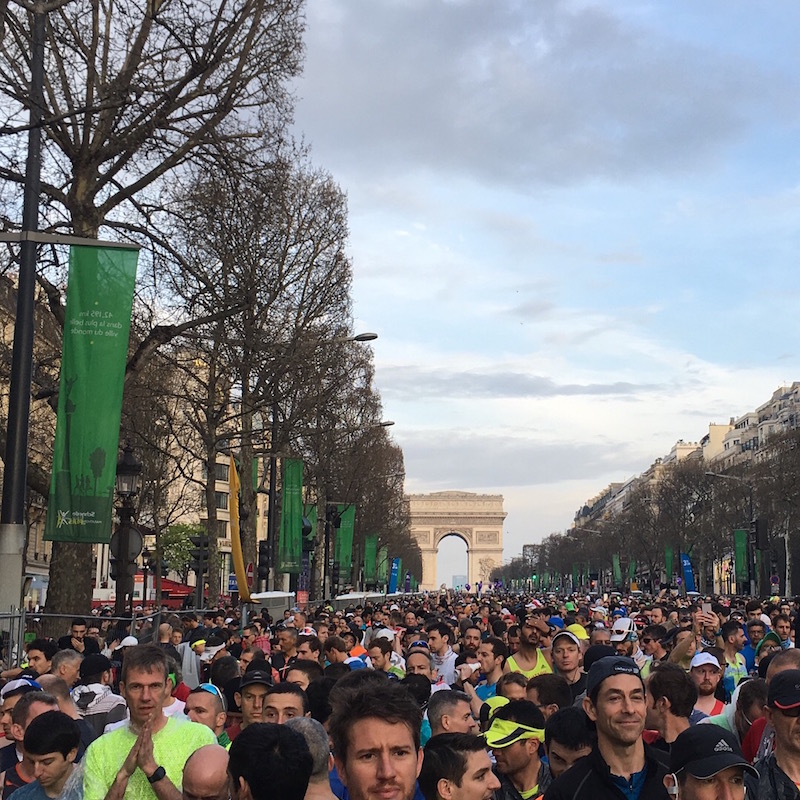 There was a good atmosphere as we got shepherded to begin. The sun was out, temperatures cool, legs felt good, stomach felt good, I was thinking: let’s get this done.

The first half felt really good, I was happy with my pace, even reigning it in at times as I was sorely tempted to get carried away - which undoubtedly would have messed things up later. I passed the 3:15 pace runner somewhere just after mile 4, and I was frequently checking the watch. In the whole event I never really found a group to run with, either getting passed folk, or being passed, I was hoping there’d be some that I’d fall in with, but alas not today. 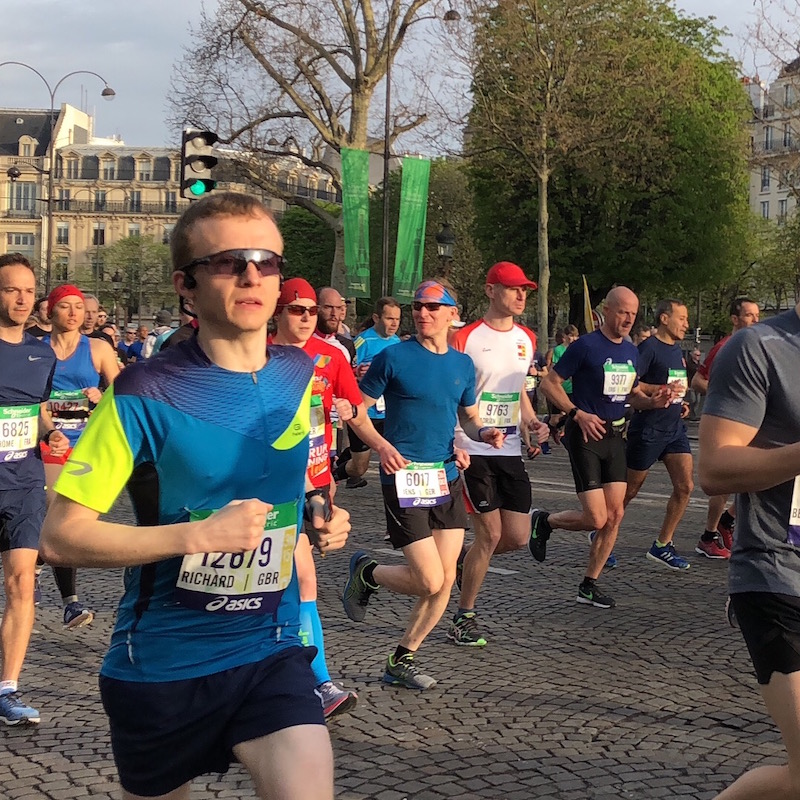 Water stations were every 5km, and I forced myself (especially in the earlier ones) to use every one. The sun was ever getting higher and stronger and I knew I’d need every drop I was able to take on (which I’ve struggled with previously). The downside was wildly alternating pace through the stations, and an effort to get back into a rhythm afterwards.

I knecked my first gel (carried 3) at mile 7, and went off piste at the water station at around 14 as I selected a piece of banana. Risky. So the other gels went down at 15 and 21. While we’re on it, nuturition seemed to work out well, my stomach behaved, felt had decent energy levels to the finish. Thank goodness. Water was harder towards the end as it really did feel hot in the sun - I mean I’ve been used to running in frost and snow for the last few months 😆

I felt like it was becoming tough going around 15, but focussed my mind on the Eiffel Tower which I could see coming up and knew we were due to pass at 18. I spotted Gemma talking a photo there which was a boost as I pushed into the unknown.

Unknown - due to my knee niggles just as I was getting the distance out in my training I dropped mileage for a couple of weeks, which was the right thing to do but it meant I’d cut my 20ish mile long run from the plan - 17 was the furthest I got in training (and furthest ever before today).

The boost lasted a few miles, but I faded a bit once the 20s got going. It was warm like I said, there was at least one hill (long drag), and then a rough cobbled surface in the park, but really it was down to that missing training I think. I had stopped looking at my watch for pace, and was just going as fast as I could with the remaining distance in mind.

KM and mile markers, water every 5k and sponge/splash just after there’s always something going on - more than I expected, and it was these little incremental markers that I focussed on to get through.

Finally. Finally the twiddly bit in the park came, and it was the last mile or so. Push a bit more, nope, I quickly knew it was too early. Mile 26 came on my watch - it had been slightly ahead all morning - and I engaged my final reserves. Round Porte Dauphine and onto Avenue Foch where there were big crowds and big noise. Green carpet for the last few yards and done, fin, ooft. 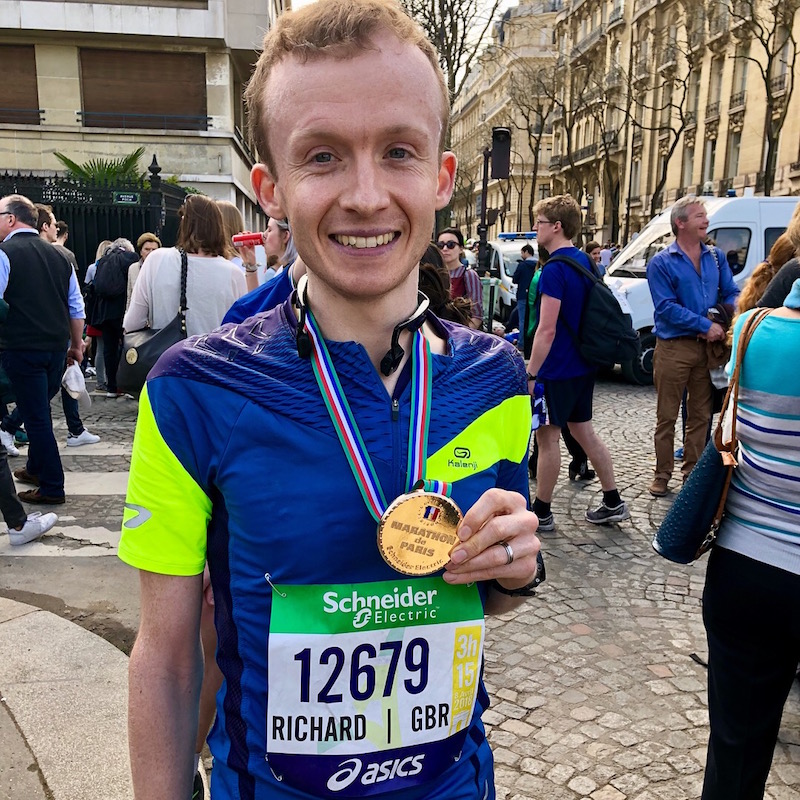 Heh, the next 500m or so through t-shirts, medals, water and food were seriously hard as it seemed my body just wanted to shut down. Light headed I took a few moments against a railing. Actually I think water should have been much earlier in the finish, everyone was gasping but had to get through t-shirts etc first.

Found the exit, found Gemma, and I still had no words for at least 5 mins as blood pressure, heart rate and whatever else sorted themselves out. The journey home was comedy too, all these runners hobbling up and down stairs through the metro. I was very much one of them 😄

Really pleased with it, and the whole weekend. Had fun, it was tough as hell (a positive) and put up a time that I’m pretty pleased with. Official time 3:08:20. 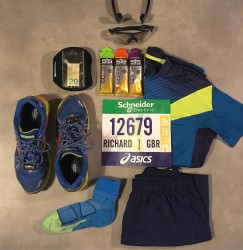