Audax has been on my radar for a little while - longer events appeal for some strange reason and last week I bit the bullet and entered the Forth and Tay 200.

An early start (for a Sunday) saw the alarm go at 6, breakfast, shower, and bike in the car, I was on the road at 6:40. Raining - ugh. Went bit further, still raining. This wasn't looking so inspired now!

Got to where we were to park our cars (Dalmeny station) and it had stopped, and brightened up a bit. Down the hill to the hall to collect the brevet card (all these strange new words!), swipe a blueberry muffin, and away. By the time all this had happened most of the group (probably about 70 or so) had already started - it was 8:10am. Not to worry I was quite happy, and probably expecting to do a majority of the ride solo anyway. 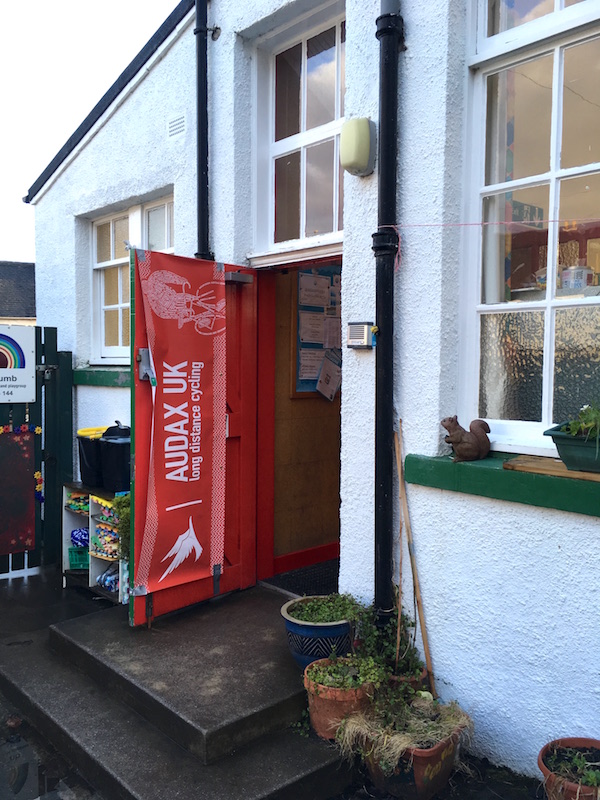 Huh, my gears seemed to be slipping when I was putting some power on. Full story - I noticed I needed a new chain yesterday (old one had only done 2k) and scrambled to get one - then the derailleur didn't seem to like it quite and I'd fiddled with it all last night - I thought I'd got it sorted, maybe not. This could be a long day.

Quick stop for a pic at the bridge - my first time cycling over the Forth Road Bridge and head for the roadworks (we'd been warned about) on the other side. The roads were sodden - so so glad I replaced my mudguards last week. The gears were seeming to be ok as long as I didn't put too much power on, and were ok lower down the cassette - maybe it'd be ok.

Caught up with a couple of single riders, and a couple of groups. Now - I had arranged with Mrs S to meet at Falkland (very much at the other end of the ride) for some cake and, well more cake - so really wanted to get round there before the cafe closed - so I was pushing on a bit - didn't stick with any of these groups, but everyone was "good morning", and the like. Ha, this first bit I didn't know at all, so had it plugged in to my Garmin, and was following directions. I passed one group, only to take a left at the next roundabout - nope bad Garmin (at least that's what I'm claiming). Was funny to have to catch and "good morning" all over again a few mins later. 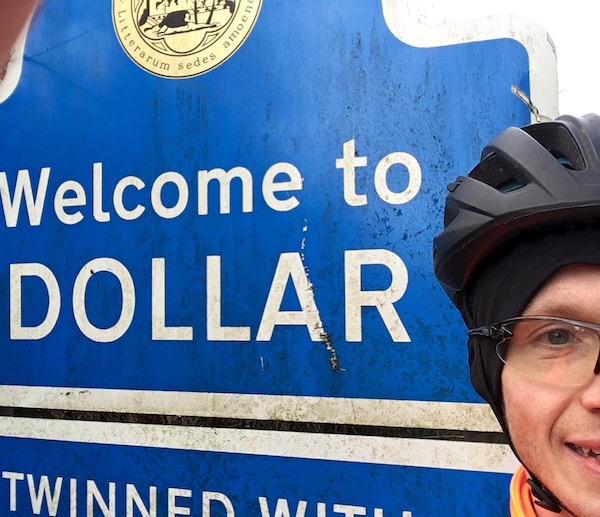 Dollar the first "control" - the Co-op was mobbed with cyclists all getting their receipts to prove they were there. I got mine - for a Trek bar that in the end I didn't eat - and tried to make some more progress.

Glen Devon is lovely to cycle through - albeit chilly this morning. I caught on to the back of a group of five and stopped to chat to some friendly folk for 15 mins or so, before pushing forward again. 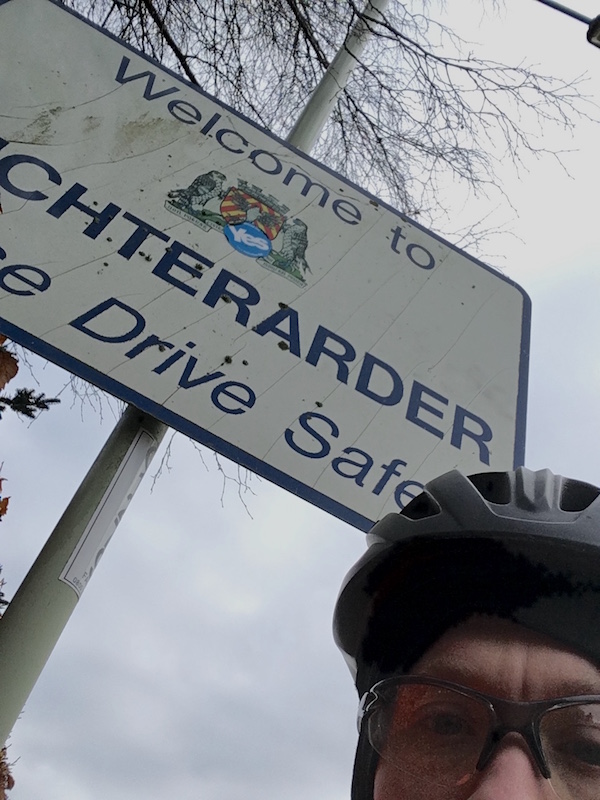 Auchterarder was the second control, and Synergy Cycles was my target. Been on my list for a visit for a while, and I'd spotted they are doing free coffee to riders on Sundays - win/win! It was good coffee too, but I also needed a receipt, so "had" to buy a piece of chocolatey tasty too :)

On the road again, and I wasn't so happy with the way the front mudguard was sitting, so quick stop and adjustment. This part of the route (here to Falkland) I mostly know, and was quite worried about the battery on my Garmin lasting long enough, so directions were up to my capacity to remember.

Seemed to make good speed on this stretch, it even got warm with the sun coming out. Rode with a couple of friendly guys on a Sunday run - were finishing in Dunning. Other than that just motored on to the next control in Tayport. 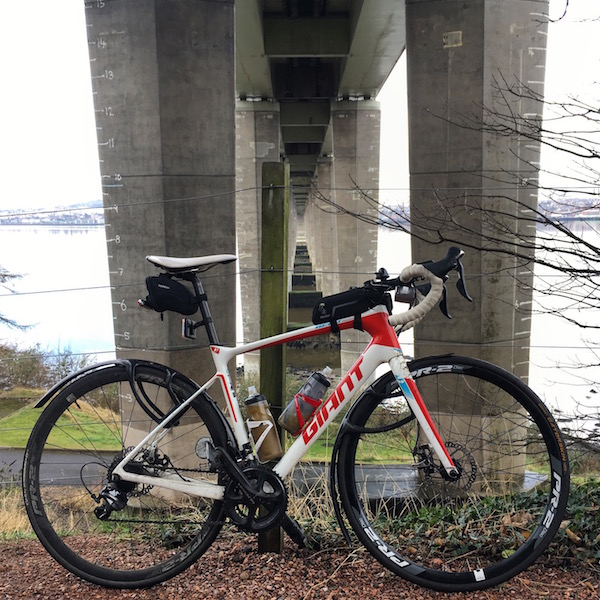 Meh, riding my commute roads on the weekend, not fun. Despite the distance from Auchterarder I made minimal stops in Tayport and St Andrews. But there was now a cold easterly wind, and I did feel it. Actually the run out of St Andrews I lost all energy and was struggling somewhat. Maybe something to do with riding to home, and then continuing past. Well that and it being lunchtime, and only having really had some crappy on-the-bike food.

Also, probably a mile or so from Ceres I had what was probably my worst overtake - at least time had dulled some of the other special maneuvers! Bike + car + car, at around 15mph, 50mph, 40mph on a narrow road only only just goes. Seriously close. Thanks dark blue VW.

I remembered that a couple of friends had arranged a drop-in cycling meet at The Villager in Ceres, it was now ever more tempting. Anyway the water bottles needed refilling, and actually now I needed something in my stomach more than I'd had so far. Falkland, with proper lunch, only 10 miles away or not. I consumed a breakfast roll, cheese scone and that seemed to do the trick :) Good also to have a quick catch up. 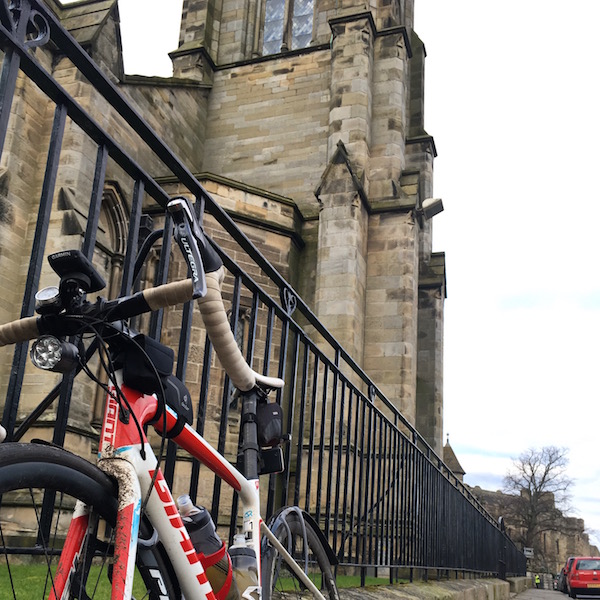 With a bit more vigor Falkland was found. Mrs S was met, and panini and cake was consumed. Campbell's was busy and we joined with another couple of cyclists on the ride (Nick and Jeremy) and had a good chat.

Urk, the climb out of Falkland - pretty tough at the best of times, on mile 103 of a ride, ha! I took it with the guys I'd met at the cafe, and that made it a lot easier to be honest. And my gears had stopped slipping - good stuff!

Now time was getting on and the sun getting lower, strictly we'd not get to the end in daylight, but there was enough twilight that it wasn't much of a problem - doing the last bit (unknown roads to me) in the dark was something I'd wanted to avoid. To be honest this bit was a bit dull, nondescript Fife towns, more sillyish traffic, traffic lights and junctions - but there was a couple of us riding together which made it better.

I lost the guys I was riding with somewhere with about 8 miles to go. Got to the Forth Road Bridge again, got photo, and got back to the hall. Whooohoooo :) 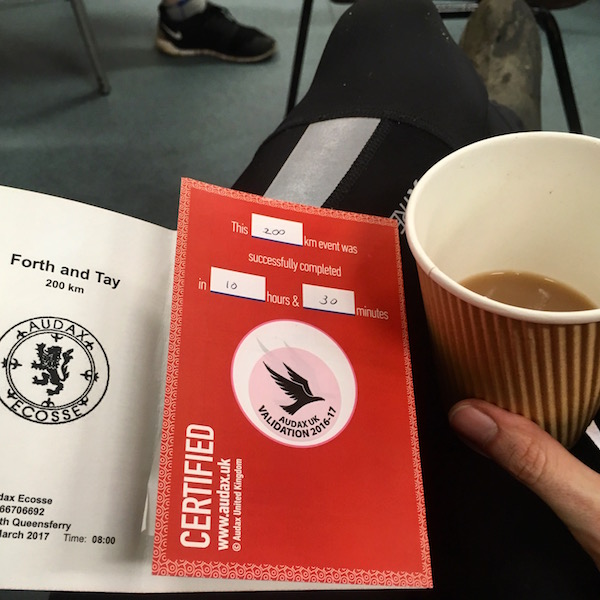 Cue a brew, cake and some other bits. A bit of a chat with some other folk that'd just finished. Got the brevet card validated, and back up the hill to the car (ooch).

Conclusion. Audax is fantastic, and yes I'll be doing more, soon. The camaraderie is great, everyone is friendly, you can join a group or do your own thing. Everything is just seriously relaxed. Much to like.

As a stepping stone to Tour of the Highlands I'm happy to have done the distance, and now know I just need to keep that maintained, and step up the climbing a bit more too.

I'm doing Tour of the Highlands at the end of May (12 weeks away!) and raising money for the MS Society. Take a look at my JustGiving page, and please donate if you can :) 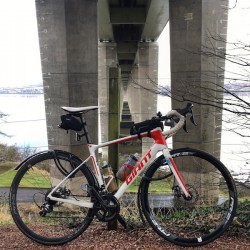 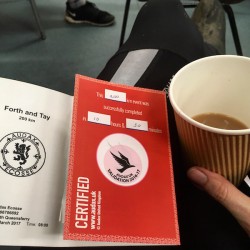 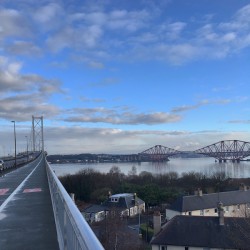