Saturday 2nd September I’m cycling the UK’s biggest climb Bealach na Bà raising money for the MS Society. And all being well on Sunday 3rd, I’ll cycle it in the opposite direction - Bealach both ways!

Bealach na Bà is the UK’s biggest climb at 2,053ft. It achieves that in around 6 miles from Tornapress to Applecross in the Scottish Highlands. In the opposite direction it’s almost as brutal with similar elevation in 5 pain-filled miles from Applecross.

I’m participating in the cycling sportive, Bealach Mor, which is the Saturday and starts in Kinlochewe, It covers 90 miles with the Bealach featuring just before half way. On the Sunday I’m planning a solo 47 mile route from the cottage we’re staying in which hits the north side of the Bealach after 34 miles.

I started cycling a couple of years ago, and after completing my first sportives last year I was looking for a challenge to target in 2017. I originally planned to do the Tour of the Highlands in May, but three weeks before I came off the bike and managed to break my collarbone which put a hold on that, and a hold on my cycling for a few weeks. I deferred my entry to Tour of the Highlands and will complete it in 2018.

I have a family connection to multiple sclerosis, which is my motivation for raising funds for the MS Society, please donate if you can.

Bealach Mor is an annual cycling sportive run by Hands on Events. A couple of hundred like-minded two-wheel enthusiasts head for a remote part of the Highlands to takle the UK's biggest climb. It starts in Kinlochewe and navigates clockwise, Achnasheen, Lochcarron, Applecross, Shieldaig and back to Kinlochewe. This year it's on Saturday 2nd September. 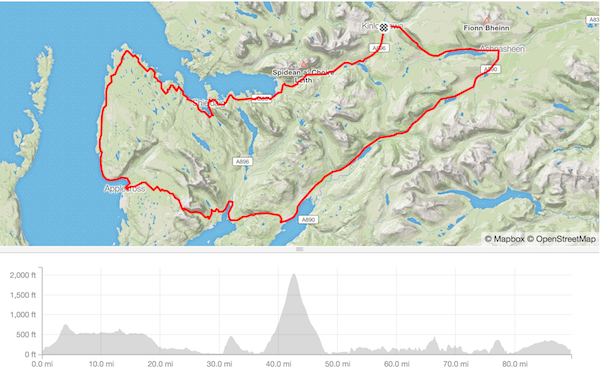 On Sunday 3rd September, weather permitting, I'm planning on a solo route to takle the Bealach from the other direction. 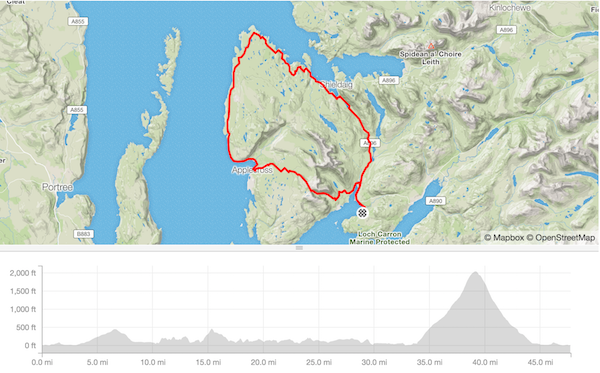 I started cycling in 2015, and completed my first sportive events last year (Etape Caledonia, Tour o the Borders). My longest ride to date was a jaunt to Glen Clova, 130 miles, but mostly my riding is the 34 mile round trip commute from St Andrews to Dundee.

That trip to Glen Clova piqued my interest and set me looking out a challenge for 2017. Having spotted Tour of the Highlands while keeping it quiet I arranged a double century weekend (Len Reid Memorial Ride 103 miles, Fife Century Reliability Trial 106 miles) to test the waters. This being successful I made my entry and thought about how to kick it all off…

With a little inspiration I decided to do a route in the shape of a big "MS". Completing this in October the challenge is now on. You can follow my progress on this page, my JustGiving page (please donate :), or by following me on Strava or Twitter.

Just training for this will be a challenge, with some big miles, and big climbs to be done. Tour of the Highlands is going to be one of the biggest challenges I've faced on the bike, and with your support raising funds for the MS Society will give me the extra strength to crest the final punishing climbs.

MS is the most common progressive neurological condition affecting young adults, with diagnosis generally between the ages of 20 and 40. MS is the result of damage to the myelin - a protective sheath surrounding nerve fibres of the central nervous system. When myelin is damaged this interferes with messages from the brain and other parts of the body causing a wide range of symptoms including fatigue, mobility issues and problems with co-ordination.

There is currently no cure for MS. For some people, MS is characterised by periods of relapse and remission while for others it has a progressive pattern. For everyone, it makes life unpredictable.

The MS Society depends entirely on charitable fundraising and the support of the public and volunteers to be able to do their work.

Please help me in helping them to raise funds for this worthy cause. 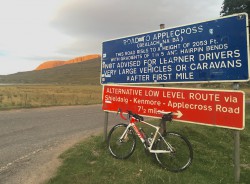 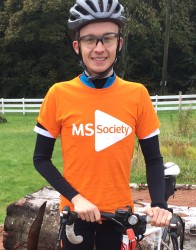 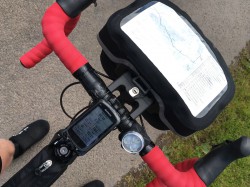